Let me start off by telling you that I am completely biased, because I ABSOLUTELY ADORE Disneyland Paris during Christmas Season. Whatever shows they plan, whatever souvenirs they will put on the shelves, no matter what … I love Christmas at Disneyland Paris and it’s my most favorite season of the year.

Now you might wonder why this is the case? What makes the Christmas season so amazingly special that (in my opinion) it beats seasons like ‘The Lion King & Jungle Festival’, ‘Legends of the Force – Star Wars in Disneyland Paris’ or ‘Marvel Summer of Super Heroes’?
I guess that partially it has got to do with the popularity of Christmas in general, but also because the Disneyland Park lends itself so well for Christmas decorations and the overall Christmas atmosphere.

Get in the Christmas spirit

There was a time that I found it really difficult to stay positive when the seasons changed from summer, to autumn, to winter. Especially wintertime can be hard for me. The long dark days, the cold and the extreme difference between the festive December month and the dark gray January month can bring me in a certain gloom. This has made it sometimes difficult for me to look forward to Christmas and get excited about it. This changed when we visited Disneyland Paris in November for the first time. We went in the first place to celebrate my birthday and we were all excited about that, but not so much about the Christmas part. I mean, we didn’t really felt like celebrating Christmas that early in the season. Boy, we couldn’t have been more wrong!

I remember watching the Christmas parade for the first time and I was blown away. It’s so beautiful, colorful and it gives you that Christmas-feeling you’re looking for. The music is extremely catchy (you are warned) and because it will keep on playing in your head all day long, it adds to getting into the Christmas spirit.

There’s no shortage of Christmas themed shows in Disneyland Paris too. During the day you can enjoy several Christmas shows that all have their own charm.

Merry Stitchmas was first introduced in 2017. Of course we do like Stitch, but Minnie Mouse is hilarious during the show too! The show runs several times a day, so don’t worry if you missed out. At the end of the day its less crowded because most of the audience have already seen the show. That’s why we highly recommend watching the show later in the day.

Then there’s also Mickey’s Christmas Big Band in which Mickey and Minnie Mouse are the stars of the show. Minnie Mouse has her own song (I love the piano) and Mickey even plays the drums. OMG! This show is fun for kids, but because of the music choice, as well as the humor, I find this a lovely show to enjoy for adults too. The costumes are top notch, the singers sing everything live and the Big Band is simply FANTASTIC!

Lighting of the Christmas tree

Before the day is over you’ll get to light the Christmas tree with Mickey and Minnie Mouse. This show has changed drastically over the years. I remember from our first Christmas visit that ‘lighting the Christmas tree’ was beautiful and intimate. There were Christmas carols sang by children with beautiful voices. There was also a story that was told by (I guess) Santa Claus and a child. It was a beautiful ceremony and very emotional too, but there were no characters involved. After the music a lightshow started and somehow it all made sense.

Nowadays Lighting the Christmas tree is a big show that is scheduled just before the fireworks show starts (around closing time). Lighting the tree is a ceremony executed by Mickey and Minnie Mouse and a group of carolers.

Mickey and Minnie walk up on a metal platform (so that a large audience can see them) and the caroling starts. It’s a sing-along, but most people enjoy to watch instead of singing along. Everybody is dressed in white carolers outfits and it all looks beautiful. It’s obvious that the carolers are play-backing the songs and some of them don’t even seem to know the lyrics of the songs. That’s a big no-no to me.

Personally I liked the former version of Lighting the Christmas tree more. It felt genuine. I’m curious to see if the version from 2017 and 2018 is still performed this year or if they changed it.

At Ratatouille Square (La Place de Rémy) you’ll find stands where they sell typical winterfood. During summer these same stands sell food that’s typical for certain (French) regions and food from other countries (such as the Caribbean).

The snow in the above picture is real, no so called ‘snoap’! As you can see it looks extremely cosy at Ratatouille Square. Furthermore, at the end of the day, Walt Disney’s Studios Park will close the gates after a breathtaking show. It’s called Goofy’s Incredible Christmas ( LʼIncroyable Noël de Dingo).

The first time we watched the show we were blown away by all the effects: projections, lasers, fireworks and a lot of characters and props. We watched the show a year later, but then it seemed a competently new show to me. There’s so much to see, you can hardly grasp all the action. And apparently I didn’t catch half of what happened the year before, haha!

The weather in November, December and January at Disneyland Paris

When you’re planning to visit Disneyland Paris during the winter months you might be wondering what the weather would be like and what kind of clothing to bring.

In November expect temperatures between 5 to 10 degrees Celsius (45 to 50 Fahrenheit). Last year it snowed in November very heavily for an entire day (see the picture below). As you can see I was better prepared for this than Sven 😉

In December you have to take into account temperatures between freezing point and 5 degrees (32 to 40 Fahrenheit). Please bring a warm coat, scarf, hat, warm gloves and an extra pair of socks. Don’t forget to wear boots that have thick soles, so that the cold ground can’t reach your feet easily.

In January we always had at least one day of snow! The temperature can drop below freezingpoint and mostly hits the -10 to 5 degrees Celsius (14 to 41 Fahrenheit). Besides the obvious things like a thick coat and scarf, try to wear layers. This way you can add a layer of cloths in the morning and evening (when it’s colder) and take if off during the day (and put it in your backpack). 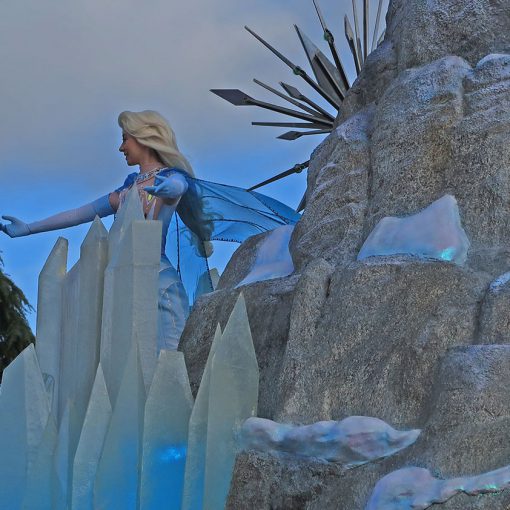 For the very first time in forever, Disneyland Paris celebrated the Frozen Celebration season (from November 2019 till May 2020). This means […]